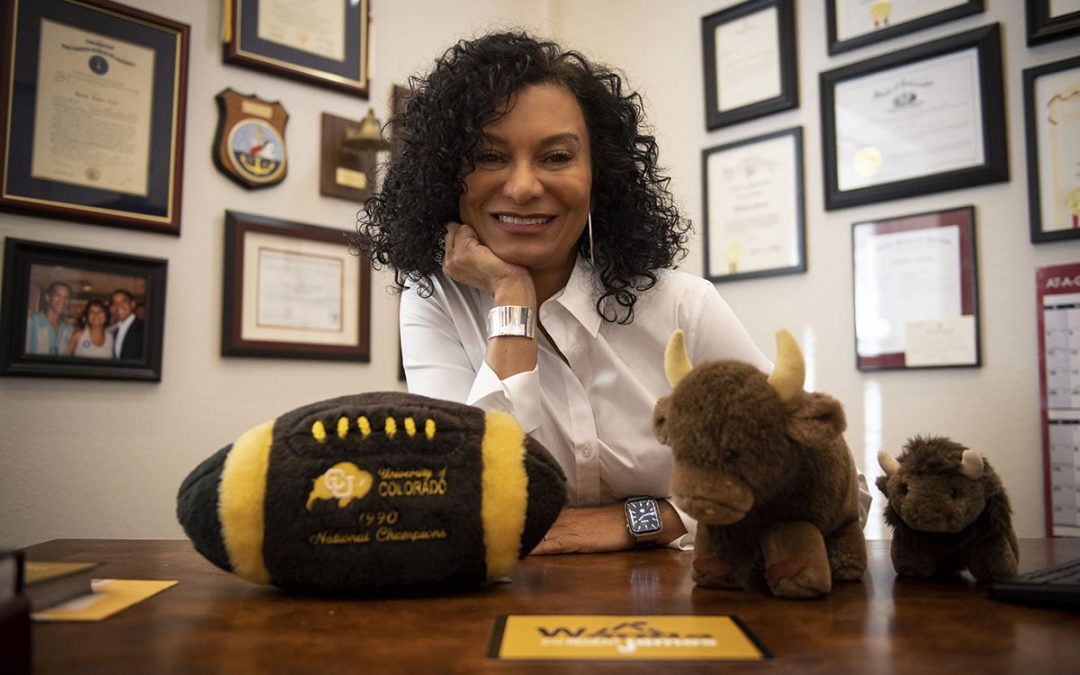 Room Redefined isn’t just focused on being professional organizers or on customizing your space so it works for you. We’re focused on changing the damaging narrative so prevalent in society that women can – and should – do it all. That’s why one of our core beliefs is to reject the notion that women should manage it all. Rather, we embrace the power of accepting enablers that can support you so you can focus on doing what you do best, whatever that may be.

Take a moment to imagine an individual that has held the titles of Naval Officer, Fortune 500 Executive, Entrepreneur, and Advocate. More than likely, you are conjuring up a picture of man. You’d be wrong. These are all titles Wanda James, current candidate for CU Regent, has held in her career – a career she has spent working to change the narrative.

Raised by her father in a single-parent household, James was never taught or guided by society’s traditional gender roles. Instead, her father enabled her by teaching her to be self-sufficient and to protect herself. And when James wanted to follow in her father’s footsteps to join the male-dominated military, her father told her, “You do you.” To this day, when she gets hit with a new barrier, she hears her dad.

“Other people’s rules hold us back. Change the narrative. Break the bias. Write your own rules.”

Society and its rules are something that James is passionate about. But it wasn’t until she hit 50 that her whole narrative changed, and she rewrote her rule book. The first half of her life was all male focused. Now, everything is woman focused.

For James, society’s rules are highly influential with how we, as women, see ourselves, our abilities, and our qualifications in both our personal and professional lives. “We need to throw out the rule book that aren’t the rules that you have created for you. You have to write the rules that work for you in your life, not the rules that somebody else has handed you from generations ago,” says James.

So, how do we change the narrative? According to James, “We as women, need to write our own rule book.” We need to “normalize women’s power, what we see as powerful, what our path has been, and what we want instead of going with what has been fed to us in the past.”

Society tells women we have to do it all: have a high-achieving career, be the perfect mom, maintain a magazine worthy home with the perfect homecooked meal on the table, and to look flawless while doing it. As James says, “It’s not that you don’t got it. It’s that no one can do all of it unless you cut out sleeping and eating… and that doesn’t work either.”

We continually watch men further their careers, gain new leadership experience, and make more money – all while receiving praise along the way. But James points out something men and women need to remember, “Men didn’t do that without having a woman next to them making sure everything else in their life was cleared so their path was singular. That’s an important part we’re missing.”

“Changing the world because women see things in a different way.”

As women, it’s not just a matter of succeeding in the men’s world, it’s a matter of changing the world because women see things in a different way. It’s about clearing our path to make sure we can focus on doing what we do best. It’s about accepting help and finding an enabler to support you. It’s about changing the narrative of what we can – and should – expect from ourselves as women.

Wanda James is changing the narrative by writing her own rules. She’s running for CU Regent, a role that will make a woman in power more visible to the community. She’s taking what she learned from men in the first half of her career and is now sharing those skills and teaching them to women to support other women. She embraces the enablers in her life and knows that someone supporting you only makes you stronger.

Just like James, we can all use the support of an enabler to help us when we encounter new challenges. They might be your voice of reason, a support system that shoulders some of your burden, a cheerleader and advocate, and so much more. Room Redefined believes it’s time we look at rules and our lists to see how we can help ourselves and to embrace the idea of taking something off your plate and allowing the professionals to help. Having support doesn’t mean you can’t do it all, it just means you don’t have to do it alone.

Room Redefined is proud to support Wanda James, not just as a candidate for CU Regent, but as a change-maker in our community.

Learn more about Wanda and support her campaign at wanda4cu.com

Erin Gaskins is owner of Room Redefined, a professional organizing company based in Denver, Colorado.  After 25 years in public education, Erin decided to put her passion for organizing to work in the service of others and entered the entrepreneurship journey.  Five years later, Room Redefined stands out in their dedication to offering customized organizing services to homeowners, businesses, and schools.  She and her company are strongly committed to the work of changing society’s narrative- helping other women feel comfortable with the notion that we are all stronger when we give up the “superwoman complex” and work together to accomplish our goals!